As part of our marketing efforts, we’ve recently partnered with Noticias Montreal (NM), a Canadian online newspaper that is solely available in Spanish. The agreement involved our team writing a series of blog posts for NM’s blog, in Spanish, in which we would explain how the Recognition of Acquired Competencies (RAC) process worked overall, including how it would benefit immigrants. Rather than simply promoting our services specifically, instead we sought to sensitize NM’s readership to the existence of RAC services, as a whole. From the people we have met in the past, we were aware of the following: those that can most benefit from RAC usually don’t realize it’s an option. Once RAC is explained, it’s fairly logical – but the idea of work experience counting towards academic progress, in Canada, seemed to lack exposure. So much so, in fact, that people often expressed their disbelief upon hearing about it: why hadn’t they heard of it before? It is in this spirit that we approached NM, to make sure their readers would hear about RAC, regardless of whether they ended up using our services, or not. The first blog post, which equates to “Quebec Credential Recognition: Everything a New Immigrant Needs to Know” in English, was written by one of our own content specialists, Diego Quintero (ITSS AEC). If you’re interested in following our series on Noticias Montreal, you can view all posts here. 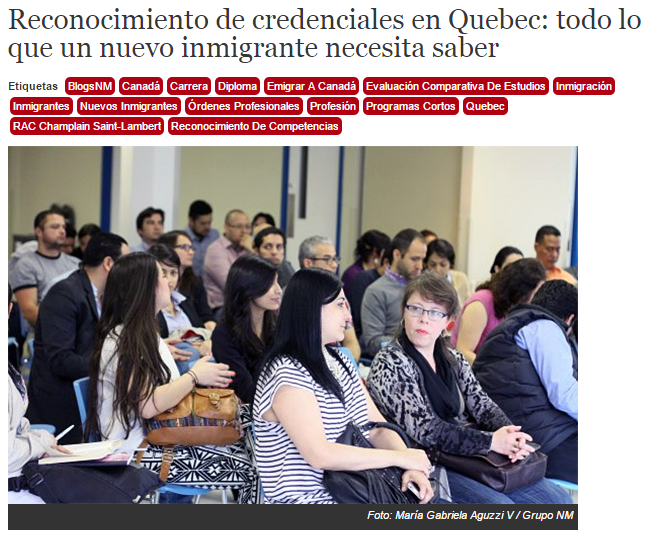 Filed under: RAC for Immigrants
Tags: